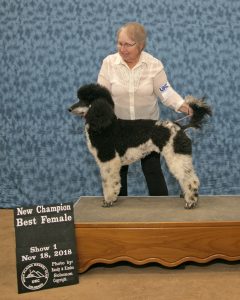 Jolene is our newest addition to the Dams page. She was born in Sept 2017, and received her UKC Championship at the age of 13 months. She will be bred during 2019 for her first litter. She is a large moyen at 41 lbs. Being a daughter of Pippa and Alex, she is a non-fading tricolor. She has a wonderful personality and is very bonded to me. We have high hope for the pups that she will produce. She is a full sister to Madison. She will replace her mom, Pippa as the major color producer here at Pikes Peak. Her hips tested Good, and she is negative for VWD1, DM, and NEWs by parentage.Her favorite activities are retrieving the ball and playing in the local streams and lakes. She has an excellent recall on the trails and loves to go hiking. 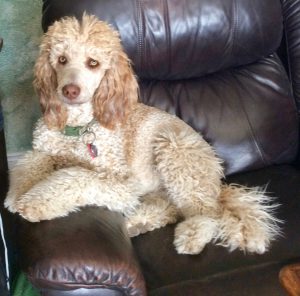 This is Pikes Peak Miss Scarlett – Known as Reba

Reba is a special girl. She is a daughter of Sheba and Jasper. She is a granddaughter of Pippa. She is AKC Reg. and is a nice moyen size- 32 lbs. The most remarkable thing about Reba is that she has GOLD eyes. These are beautiful and very rare. All of her testing is clear by parentage. We were afraid that we would not be able to have puppies from her, but after extensive testing and treatment, she did conceive. We are over the moon that she is a first time mom. She is one of the sweetest and most  mellow girls in the group. Her favorite thing is to snuggle with me. She also loves going hiking off leash in the mountains. She is always a star at the yearly Poodle Puppy Party. Reba is quite the socialite. 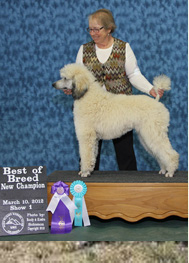 Keeper won her UKC Championship at the age of 9 months. We are so proud of her. She also took Best of Breed winning over a Grand Champion who has been Best in Show many times. What a wonderful thrill. Also, her OFA prelim hip test was rated  Excellent.  Keeper stayed at Pikes Peak Poodles to become our first Apricot Sable Phantom breeder. She also carries both parti and phantom. She produced a wide variety of colors. Before she became a mom, she had lots of love and training . She has a great nose.  Her hips are good, and she is tested negative for DM,News, and vonWillebrands. Her eyes are CERF. She gave us three wonderful litters. Keeper has recently retired from breeding and will live out her life      playing and loving her people. 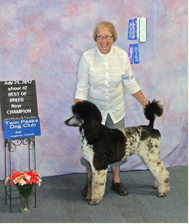 Meet Pippa- Short for Pippi Longstocking. Her name was obvious when we first met. She came to Colorado from Kit-Sue Kennels in Oklahoma by way of an airplane ride in the cabin with me. She is a beautiful Tri-color which means that she is both a red and black Phantom as well as a Parti. She is also a sable. Her genetics are clear and she has produced many beautiful and unusual colored pups like herself. She is very sweet. She bonded immediately upon arrival and has a very high desire to please. She was trained for showing in conformation and Agility or rally. She just completed her first course in Agility and she shows great promise as a competition dog. But for now, she fills her days with playing with her buddy, Keeper, and trying to get treats from me. Her OFA hip X-ray results recently came back and she received a prelim rating of Good. She is tested  negative for DM,News, and vonWillebrands. Her eyes are CERF. She has been retired  from breeding. Pippa gave us four lovely litters, many of whom have gone on to become breeders like Madison and Jolene. She will stay with Betsy and become a Therapy Dog. 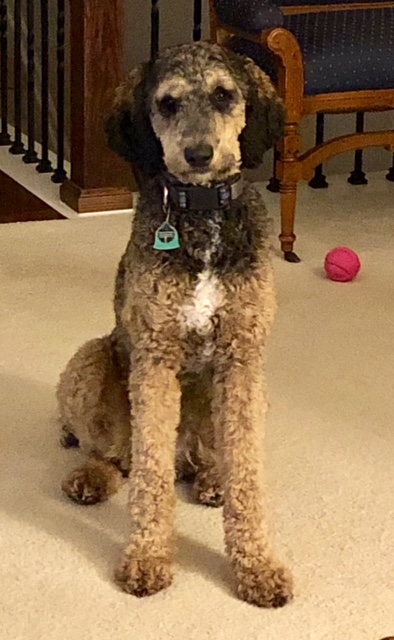 This is Della. She is AKC registered. She is a stunning red sable phantom who carries the parti gene. She is a Moyen and weighs about 28 lbs. She is the newest member of the Dams club. She is negative by parentage for DM,NEWs, and VWD1. Her hips were judged to be good on OFA prelim testing. She will have her first litter in late 2020 or early 2021.