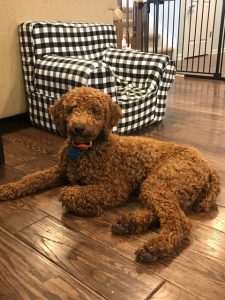 Fozzie is a small moyen poodle. He has sired several litters. He is AKC Registered, got an Excellent on his hips from OFA. He is VWD1, DM, and NEWs negative. He tested clear on his eyes. Fozzie is a laid back and mellow guy. His puppies seem to take on his nice temperament.He carries phantom, but not parti genes. He lives in a guardian home and is best buds with his autistic boy who cares for him. He is available for stud by live cover and cooled shipped semen.
Romeo 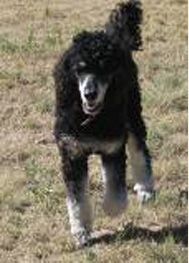 Pikes Peak Romeo is an exciting stud dog. He is 13  years old. He is a striking Black/Cream Phantom which is quite rare in the breed. He is athletic, energetic, and above all, affectionate. He loves to play outdoors, but is happy to be inside with the people, as well. He has a beautiful thick and tight curly coat that is a match for any top show dog. His proportions are just right and he has excellent conformation. He stands 23 inches and weighs 49 pounds. His testing for eyes(PRA) is negative, and his preliminary OFA rating is Good. He is von Willebrands negative. Romeo is available at stud with a litter guaranteed. One of his favorite things is to go hiking with me, off leash, in the mountains. He is a great companion- with me wherever I go. He loves to go to the office with me and greet my visitors. He is the sire that started my line of breeding oh so many years ago. He is the sire of Juliet, my close friend and dam of Alex. 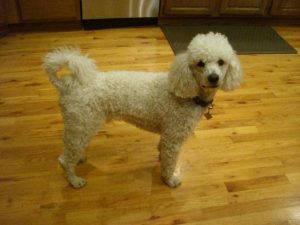 Alex is a really cute fella who stands 19 inches and weighs 33 lbs. He has sired several litters  of the prettiest pups. He is the father of Madison and Jolene.  They have great temperaments. His hips are rated Good. He is clear for VWD1, DM, and NEWs. Alex loves to play in the snow and to hike in the mountains. He is the only breeding son of Juliet. 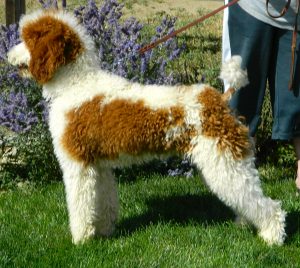 Bandit belongs to a friend, and is available to Pikes Peak only for breeding to my girls.  He is a big boy, weighing about 55 lbs. All of his testing is negative for genetic diseases. His hips tested Good for OFA. He is a real lovcr boy and we appreciate that Powder Valley has made him available for breeding.
Walter

This is Pikes Peak Walter.  He is available for breeding only by frozen semen as he has been neutered. He is a gorgeous black/white parti who carries phantom genes. His first babies arrived in the spring of 2011. He was a dad again in October 2011.He stands 24 inches and weighs 52 lbs now. Walter is AKC registered. He is negative for VWD1,DM, and NEWs. He has the sweetest disposition, which he passes to his babies. He is son of Sake and Prince. He is OFA Good(Prelim). He is available at stud by frozen semen only.

This is Ozzy. He is a young stud. He is AKC registered and both of his parents are UKC Champions. He weighs 54 lbs. He is clear by parentage for DM,NEWs, and VWD1.  His OFA prelim hips rating is good. From the photo you can see that he is a black and cream brindle phantom. His color will not fade. He is very athletic and affectionate. He is available at stud for live cover and cooled shipped semen. 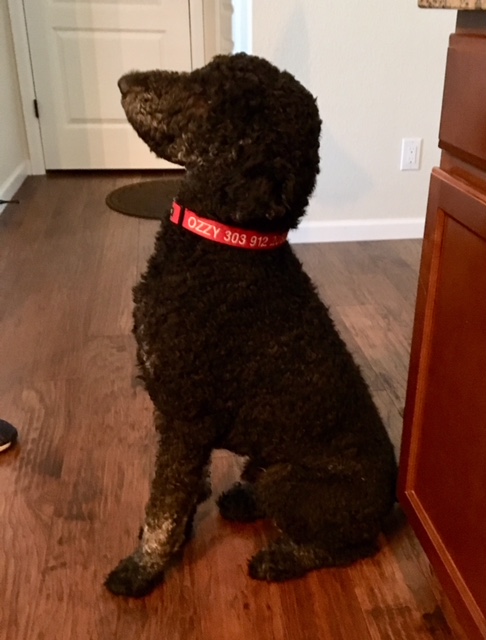 This is Ozzy, the daddy.

We have a new stud who has joined the family. His name is Copper. He is a black and red phantom . He carries the parti gene, so therefore he can produce Tricolor puppies. He is AKC registered and is a nice sized moyen weighing 27 lbs. He has a wonderful structure and a lovely mellow temperament. We are excited to announce that he has proven himself as a stud with his first two litters due in Dec. 2021. 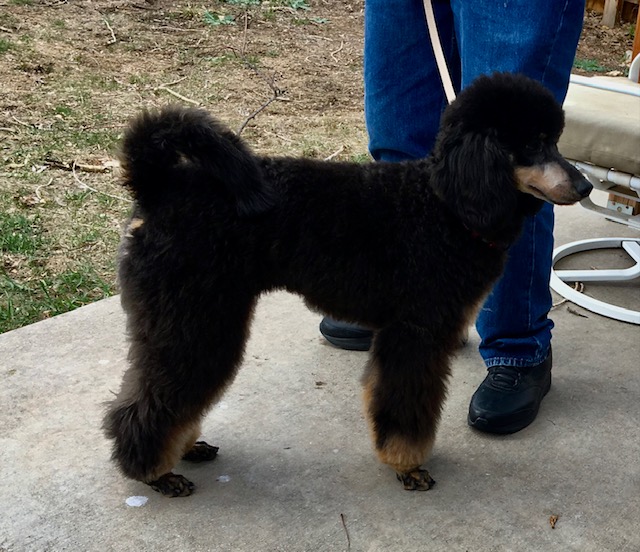